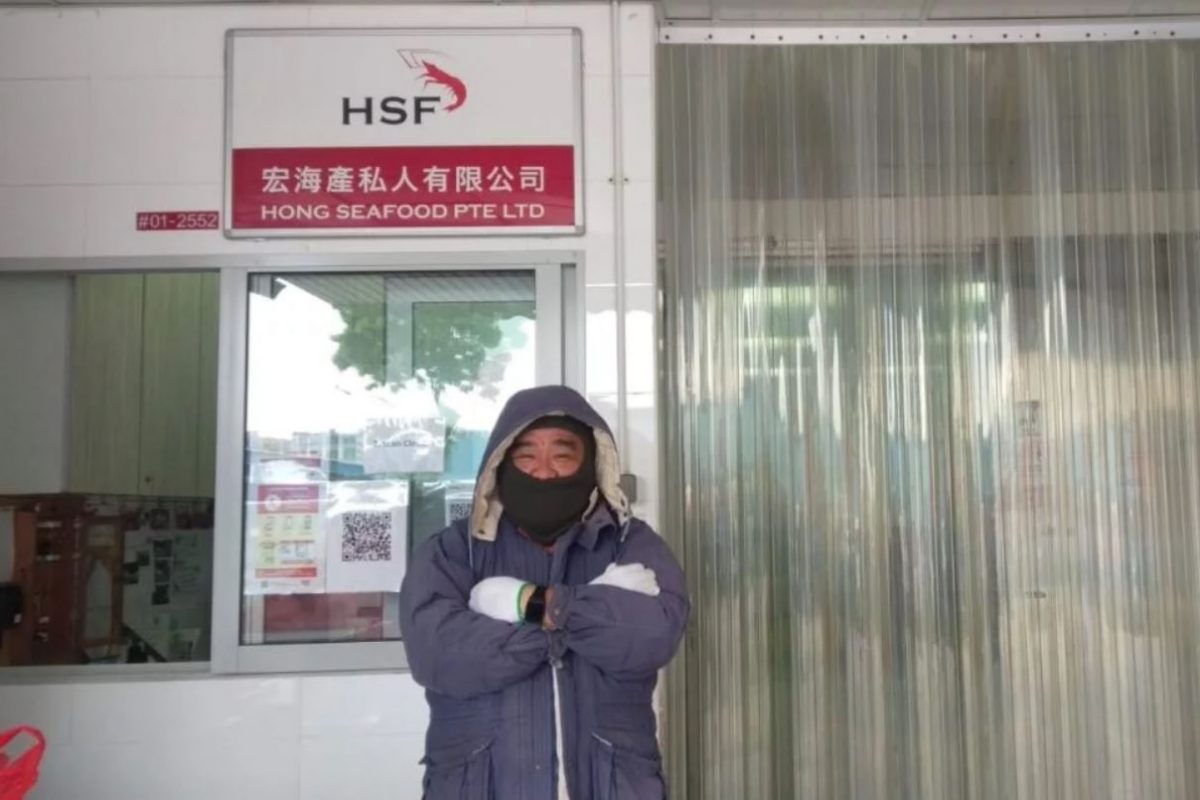 It was a rainy Wednesday morning when we arrived at the office of Hong Seafood located at Tai Seng Avenue.

We were greeted like old friends as Bob ushered us through the door into a meeting room. There we were served with a cup of warm and soothing tea each. I still remember how fuzzy and warm I felt after drinking the tea, as the 47-year-old bubbly sales executive who is also a union leader beckons us to try the tea.

“It’s Rooibos tea, good for health and it’s caffeine-free!”, he said as his face beamed with pleasure.

Bob Ang has been with the company for as long as he remembers. The father of one began working in Hong Seafood after completing full-time National Service (NS).

Like every other year, the seafood supplier was busy preparing for the upcoming Lunar New Year. It was one of their most significant economic events – until the COVID-19 hit our shores.

The unexpected pandemic saw supplies piling up in Hong Seafood’s cold store amidst a drastic slump in sales. Sales declined drastically by 95% as customers cancelled their orders.

“It was extremely demoralising,” Bob recalls.

The plunge in sales hastened the company to quickly take the business online.

“To be honest, going digital has always been at the back of our mind. But we just never got around to it due to the hectic day-to-day business. This was until COVID-19 hit. We had no choice but to accelerate the adoption of e-commerce and diversify our offerings to not just the businesses, but directly to the consumers as well.”

And it didn’t stop just there. Besides setting up an e-commerce business, Bob started to turn to live selling on Facebook some two months ago to promote their products.

When asked how he came to the idea, he shared, “Well, the main thing for me was to make sure things are still moving. When there is a business, the employees will have work to do. Together with the company, we just want to make sure employees’ livelihoods are not affected. Till date, my boss has not taken the route of pay cuts and we are thankful for that.”

Check out one of his recent Facebook live selling videos below!

“But almost everyone’s doing live selling on social media now, what makes your live selling different from theirs?” I asked.

“Other than just selling products online, we also collaborate with restaurant Chefs to conduct cooking classes whereby we share their recipes and cooking methods, so customers can make their own dishes at home!”

“And you are comfortable with that? Are you not camera shy?” I cut in.

“It gets better once you get the hang of it, and nothing’s scarier than when you know people’s livelihoods are at stake,” he admits.

Bob tells me that there are around 30 employees at Hong Seafood. The abrupt shock from COVID-19 had generated much uncertainties amongst the employees. Moral was low and everyone was worried about their job. At that point in time, all he could think of was how to retain jobs for his colleagues.

Working with the union to save jobs

Unlike some employers who may resist a union’s organising effort, I was surprised to learn that Hong Seafood is a company that is very supportive of unionisation and is very welcoming of the union.

Bob’s boss, Mrs Loh, has always adopted a very progressive mindset when it comes to upskilling and training. “Even if they pick up more skills, they do better and feel they can move on to greener pastures, I’ll still be supportive and be happy for them!” Mrs Loh shared.

At the May Day 2018 Awards, Hong Seafood was recognised for being a strong believer in creating a culture of growth within its company while valuing their staff’s hard work and dedication.

Together with the support of the Food, Drinks and Allied Workers Union (FDAWU), Hong Seafood managed to retain most of its employees by sending them for upskilling courses, as well as through job rotation, while others were redeployed into other jobs.

“Of course, there was some resistance in the beginning. But what to do? Everyone is having a hard time. We just have to bite the bullet and encourage the staff while we continue to do whatever we can to keep the company going and preserve jobs,” said the union leader.

With each passing week, although Hong Seafood is starting to see sales pick up again.  However, Bob tells me that they are not completely out of the woods yet.

Even then, Bob says that he believes in 山重水复疑无路，柳暗花明又一村 – which means that there is always light at the end of the tunnel, and every dark cloud has a silver lining. And this is something he wants to say to those who are struggling and going through a tough time right now.